skip to main | skip to sidebar


OUT NOW
Aldebaran "Embracing The Lightless depths" Cassette $7 plus shipping
get it here http://endtheoryrecords.storenvy.com/products/652337-aldebaran-embracing-the-lightless-depths-cassette
limited to 300 and will go fast. 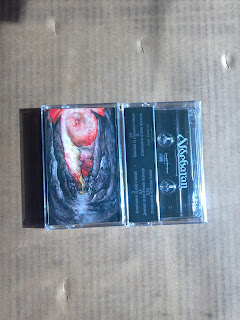 Review from pitch fork of the CD out on Profound Lore Records
The second album from Portland funeral doom quartet Aldebaran, Embracing the Lightless Depths, brandishes all the characteristics and clichés of this most torpid subgenre: There's the foreboding title, of course, and abundant references to mythical creatures and places. The drums plod with indefatigable power, so that every tom hit feels like thunder from above and each cymbal crash shatters down like the pieces of a broken chandelier. The repetitive guitar riffs circle and hang, too, cresting through clouds of distortion before disappearing again within the din. The bass sits in the middle of it all, unremarkable but necessary, saturating the space within these 20-minute sprawls with a hum that's felt as much as it is heard. Aldebaran's vocalists-- guitarist Todd T. and drummer Tim T.-- growl low and slow, roaring words about the failure of flesh and the battle for the heavens at a nearly indecipherable clip. At just less than 67 minutes, and with its glacial changes and shifts of momentum, Embracing demands all of the niche's customary resilience and attention, if not more.

Thing is, Aldebaran also reward it. Possibly the most essential record of its kind since Maine's Ocean made Pantheon of the Lesser, Embracing the Lightless Depths overcomes its stylistic circumscription by actually letting some light in and sucking it right back out. Though recorded largely in one continuous take by veteran Billy Anderson, the span comes subdivided into five tracks. The two nearly half-hour, full-band pieces, "Forever in the Dream of Death" and "Sentinel of a Sunless Abyss", are surrounded by three comparatively brief instrumentals that twinkle and build, murmur and slink, and-- at album's end-- drone and fade away. These something-like-pretty interludes offer respite from the monsters in the middle. But that same idea comes engrained in those big pieces, too. The start of "Forever in the Dream of Death", for instance, suggests the post-rock/instro-metal nexus of Pelican and Monos' time together on tour, or even a mix between Temporary Residence labelmates Envy and Explosions in the Sky. When all four pieces hurtle in unison toward the coda after a quiet spell some 16 minutes in, Aldebaran even sound triumphant, with drums racing for some prize and guitars arching together skyward. "Sentinel of a Sunless Abyss" turns the same trick, interrupting the general brood with a gorgeous calm toward the middle and building the rhythm to a fist-pumping quake near the end.

But just as soon as Aldebaran let you into these moments of incandescence or relaxation, they take them back without apology. Whether with darker and more daunting vocals or a crushing return to low-tempo form, Aldebaran always retreat into a void of hope, a Plato's cave of despair and desolation. Aldebaran are by no means the heaviest band in doom, not even close; but they make every ounce of their weight count by knowing exactly how to counter it. Disappointment, they posit, exists only because of expectation and hope. This strategy never comes across as ham-fisted or simple-minded; it simply affords Aldebaran a depth and complexity that so much of doom sometimes forgoes.

There's a tendency to dismiss heavy metal bands making literary allusions and references that approach academia as dilettantes, simpletons painting the surface with superficial, Wiki-like knowledge. This is the realm, after all, of long hair and big beards, bong hits and beer cans. But digging behind Aldebaran's irascible vocals is almost as rewarding as the record itself. Building on a continuum of American horror writing that spans from Ambrose Bierce, H.P. Lovecraft, and Robert Chambers to their legion acolytes, Aldebaran borrows a cast of characters and places from that canon (Hastur, Hali, Carcosa, and so on) and writes beautifully around them. Just as the music here sometimes uses elegance to underline the malevolence, the strength of some of these phrases and fragments-- "behind a pallid mask, cloaked in robes of broken bones," or "Hail! The absorber of light, forever in the dream of death"-- give this mean record a smart core. Really, that's just another symptom of Aldebaran's central function: crafting complex, multivalent heavy metal that keeps giving (and, as it were, taking) with repeated listens
Posted by end theory records at 3:19 PM